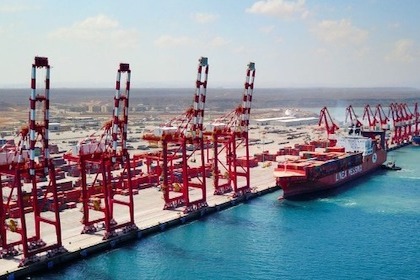 China is rapidly expanding its influence in the Indian Ocean Region, as its massive investment in ports starts to materialise. From smaller investments of $78 million in Djibouti to large ones like $1.6 billion in Gwadar, these are funded largely by Chinese state-owned enterprises. This infographic shows the 17 ports being built by China, which are now important strategic, economic and political outposts for the country.

The Indian Ocean Region (IOR) presents a unique opportunity to develop a Blue Economy, with security, sustainability and business profitability as its three pillars. An IOR Defence Ministers' Conclave held on 4 February provided a platform to discuss regional cooperation, linking development with defence, and emphasized India's pivotal position within the IOR.

The foreign ministers of the Quad countries meet for the first time in New York today even as the Indo-Pacific has turned into a keenly contested geopolitical arena. Some countries are offering to play a mediatory role while other triangular equations are also undergoing change. An analysis of some of the relationships at work here

China has replaced India as Sri Lanka’s biggest economic partner. It is gaining control of Sri Lanka’s ports, which can give it leverage over India’s external trade

India must deepen its involvement with countries of the Indian Ocean Region on issues of security, commerce, and connectivity: this was the upshot of the second Indian Ocean Conference, held by the India Foundation in Colombo two weeks ago

The two decade-old Indian Ocean Rim Association holds its first ever summit next week. Maritime safety and security in the region is a paramount concern as also enhanced trade, but will the Blue Economy be included as a priority? Another area of concern is devising modalities for cooperation with dialogue partners, such as the United States, China and Japan

Does India plan to remodel its Andaman & Nicobar Islands as a launching pad for future security operations to check growing Chinese inroads in the Indian Ocean Region? Development of the islands has long been ignored to India’s detriment, and their strategic position in the Indian Ocean, underutilised.

After decades of passivity, India is beginning to assert itself in the maritime arena. There is a whiff of salt in the usually 'sea-blind' corridors of Delhi, where the Modi government clearly sees the linkage between the possession of maritime wherewithal, both civilian and military, and the furthering of national prosperity, through ever-increasing trade.