Cdr Amrut Godbole, a senior serving naval officer, is currently Gateway House Fellow, Indian Navy Studies Programme. A mechanical engineer by profession for the last 20 years, he has served on a variety of war ships as Engineer Officer, looking after the operation and maintenance of propulsion (gas turbine engines), power generation and auxiliary systems. Six years into his naval career, Cdr Godbole did his master’s in marine engineering from the Indian Institute of Technology, Bombay (2008). He was soon after appointed to the Navy’s premier technical training institute, INS Shivaji, Lonavla, as senior instructor of the gas turbine division where he guided the project for the development of controllers for gas turbine generators. He was also associated with the operational audit of warships and the training of their staff at the Sea Training Division, Mumbai. He has also been Manager (Quality Assurance) at the Gas Turbine Repair and Overhaul Facility of the Navy in Visakhapatnam. He is an alumnus of the Naval College of Engineering, INS Shivaji, Lonavla. His areas of interest include: technology absorption and adaptation techniques, disruptive technology, and geopolitics.
Expertise

Areas of expertise: Operation and maintenance of marine gas turbines; design review of propulsion and systems in ship-building; marine engineering.

Courtesy: Shutterstock
Oil prices, arms exports and conflict are inter related especially when it comes to the U.S. Its arms industry grows when high prices and conflicts coincide. This has kept West Asia on a perennial geopolitical boil. This infographic charts the highs and lows of U.S. arms sales, especially in the light of conflicts centred around West Asia 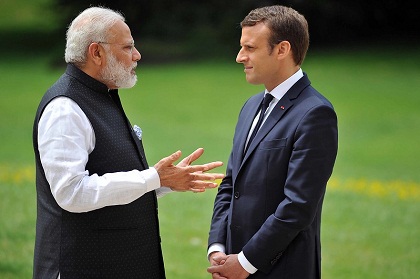 Courtesy: MEA/Flickr
India and France have converging interests in the Indo-Pacific – diplomatic, strategic and economic. The 4th Indo-French Maritime Security Dialogue, being held in New Delhi (December 9-10), is an example of major bilateral cooperation. By working together, the two countries can be the model for fostering a rules-based, free, open and inclusive region