Sifra Lentin is Fellow, Bombay History Studies. She was Visiting Fellow 2018 at the Herbert Katz Center for Advanced Judaic Studies at University of Pennsylvania for a project on Karachi’s Jews. Her latest Gateway House policy report on “India and the SCO, Bound by Buddhism” (November 2020) proposed how India could leverage her soft power as the holy land of Buddhism in this multilateral grouping.  Her “Mumbai-Shanghai Sister Cities” report (May 2017): proposed recommendations on how sister city relationships between these two cities can be made to work. She has also written a number of books, namely, Bombay’s International Linkages (Gateway House, 2019); Our Legacy: The Dwarkadas Family of Bombay (2018), and A Salute to the Sword Arm – A photo Essay on the Western Fleet (Western Naval Command, 2007). Her work has also appeared in edited volumes: “The Jewish Presence in Bombay” in India’s Jewish Heritage: Ritual, Art, & Life-Cycle (Marg Publication, 2002), “Shalom India” published in One India One People’s book Know India Better (2006), “The Jewish presence in Mumbai: their contribution to the city’s economic, social and cultural fabric”, in Mumbai—Socio-Cultural Perspectives: Contribution of Ethnic Groups & Communities (Primus Books, 2017).

Sifra graduated in English Literature from Elphinstone College, Mumbai, and went on to complete her Bachelor’s in General Law (BGL) from Government Law College, Mumbai.  Her earlier career was in journalism with a focus on Bombay and South Asian Jewish history. Most notably, she wrote a popular thrice-weekly column for Mid-Day “Vintage Mumbai” from 1995 to 1997 and a five-part Partition series for Reuters on the golden jubilee of Indian Independence in 1997. She is on the Board of Trustees of the Sir Jacob Sassoon School (Byculla, Mumbai). 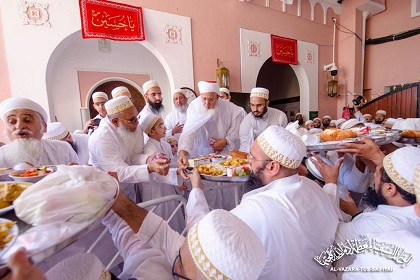 Courtesy: Alvazarat
The Dawoodi Bohra diaspora is present in over 40 countries that are home to 500 sizeable communities. From a predominantly Indian Ocean merchant diaspora in the past, today, its young prefer to seek educational and professional opportunities in developed countries, like the United States. What remains unchanged is the Bohras' traditional way of life, as lived through its rich and composite cuisine and its unique, ever-evolving language – Lisan-ul-Dawat – both of which connect the community across continents.

Courtesy: SBUT
The Mumbai-headquartered Dawoodi Bohra community has a rich legacy of business, overseas maritime trade, and, today, a strong global community network that connects its 1 million faithful, wherever they are, in real time. The community's strength is its network, even 1,000 years ago, even without technology.

Courtesy: Wikimedia commons & gloriabyculla.wordpress
On 21 January, the Bombay Stock Exchange index crossed the 50,000 mark – the first-ever in its 146-year history. A similar stock market boom occurred in 1863. It was led by the city’s legendary stock-bullion-cotton broker, Premchund Roychand. Unlike today’s Bad Boy Billionaires, Roychand settled all his dues after which he earned back his fortune. Well-known as the sole donor of Mumbai University’s Rajabai Clock Tower, he not only met all pending philanthropic commitments made before the 1865 crash but continued giving more.

Courtesy: Gateway House
The 20th meeting of the Council of the Shanghai Cooperation Organization (SCO) Heads of States was held virtually on 10th November, 2020. The meeting precedes the SCO Summit to be hosted by India at the end of this month, and for which preparations have been on through the year. In this compendium of three essays, Gateway House assesses the potential for deepening economic cooperation between India & SCO, asks whether the SCO Charter needs dynamism and revision, and traces the roots of the regions's Buddhist presence, back to India.

Courtesy: Gateway House
In November this year, India will be hosting the Shanghai Cooperation Council (SCO) exhibition “Shared Buddhist Heritage” to coincide with the SCO Council of Heads of Government Meeting and two Ministerial Level Meetings. This paper recommends a theme on India’s Buddhist legacy in the SCO, which ties together three important Buddhist historical narratives (based on archaeological evidence), that can add heft to India’s leadership in reviving people-to-people ties through Buddhism amongst the eight member nations

Courtesy: Wikipedia
Five days before World Maritime Day last week, the former Flag Ship of India’s Western Fleet headquartered in Mumbai – the Aircraft Carrier INS Viraat or R 22 – was towed away to the ship-breaking yard in Alang, Gujarat. This brought down the curtains on Viraat’s glorious career of 58 years at sea. The Indian Navy is awaiting the commissioning of a new aircraft carrier ‘Vikrant’, named after the Indian Navy’s first carrier. Just as it will one day induct another new carrier and name it after the Viraat.

Courtesy: Wikipedia
The 20th century’s worst pandemic – Spanish Flu – erupted in March 1918 in Camp Funston (Kansas, U.S.) during the Great War. Much like Covid-19 it spread globally at an astonishing pace. Its Second Autumnal Wave took about 30 million lives in four months, half of those in India. It’s sheer virulence and high mortality makes this virus the correct analogy for Covid-19

Courtesy: Gateway House
The sister cities of Mumbai and Shanghai have a shared history, population size, and economic significance. On 29 May, a roundtable between the Shanghai Institute of International Studies and Gateway House encouraged discussion on strategies to battle COVID-19, and kick-start city economies after a lockdown. Here are some workable solutions.

Courtesy: Burrough's Wellcome archive
To tackle Covid19 the Indian government has invoked the colonial-era Epidemics Act of 1897, originally enacted to tackle the Bombay Plague of 1896. The plague wreaked havoc across Bombay and presented some of the same challenges the government faces today, including a migrant labour exodus. History teaches by examples - here is a glance in to the past

Courtesy: Lovneet Bhatt
The 25 March 2020 attack on a Sikh gurudwara in Kabul focused world attention on the plight of Afghanistan’s indigenous Sikh and Hindu minorities, the target of both local lawless elements and religious fundamentalists. They once were a significant part of Afghanistan’s principally Muslim population and a mark of its cultural syncretism and religious pluralism