Change and uncertainty have marked geopolitical equations in the East Asian segment of the Indo-Pacific in the last six months. India-China relations changed visibly for the better while the U.S.-China trade war became more polarised. The Quad remained inert as did negotiations on the proposed Code of Conduct for the South China Sea. An analysis of some of the major trends

Religion is an important component of the soft power countries use in their foreign policy. Yet, no Indian government has given Islam adequate prominence, especially in its interactions with South-East Asia, where the majority of people are Muslim

This is a time of transition. A new international order is emerging with many discontinuities--and a collaboration of efforts is needed for it to be better than the one that is fragmenting

Rise of trade in services has been extraordinary but we need to value how they are traded, measured, and regulated

The African Union stands at a crossroads in its history. It needs to change direction to be relevant and show its members the path to prosperity. With Rwandan president Paul Kagame now at the helm, it may have a chance 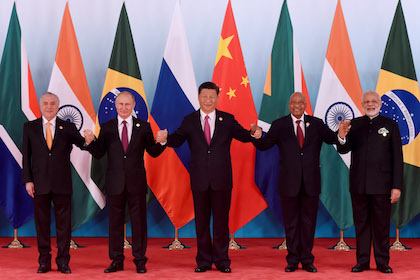 This is a partnership that has been based on mutuality, economic cooperation and undisputed political closeness ever since ASEAN’s inception. Now, the path into the future has to be different: creating a new security architecture and determining ASEAN’s role in the Quad are overarching questions that cannot be wished away

A noticeable feature of 2017 was China’s aggressiveness, which it deployed openly to advance its interests in the eastern rim, Southeast Asia, Central Asia and South Asia. This could well be the impetus for the consolidation of a broad front of China-wary nations in 2018

No easy solutions to this refugee problem are emerging despite the considerable international attention it has drawn. India has taken a pragmatic stand despite anxiety about deepening China-Myanmar ties

Regional groupings in South Asia have turned out to be like diligent pupils whose report cards show performance below par. The reasons for such an impasse range from political divergences to the economic downturn and the much talked about China factor that has many implications for India