Former Ambassador and Permanent Representative to the IAEA

Career Overview Following a distinguished 33-year diplomatic career Peter Jenkins now leads ADRg Ambassadors in the development of its relations with the UN and other important international organisations including the International Atomic Energy Agency (IAEA) and the Comprehensive Nuclear Test-Ban Treaty Organization (CTBTO). He is a consultant and frequent public commentator on economic issues, especially trade liberalisation and energy security, and on nuclear issues, especially non-proliferation and disarmament, and is also an accredited Mediator. During his time with the British Diplomatic Service, Peter Jenkins was posted twice to Vienna, and to Washington, Paris, Brazil and Geneva. His last posting was as British Permanent Representative to the IAEA and United Nations in Vienna. In that capacity he contributed to IAEA policy on a number of nuclear non-proliferation issues, and attended the 2005 NPT Review Conference, as well as its preparatory conferences in 2002 and 2003. He was also President of the 2007 IAEA Conference on Illicit Trafficking of Nuclear Materials, and a vice-chairman of the UN Ad Hoc Committee for the negotiation of a UN Convention on Corruption. In Washington he was Private Secretary to two Ambassadors; in Paris he promoted Franco-British economic and energy ties, and dealt with issues arising from the creation of a European single market; in Brazil he contributed to a strengthening of UK/Brazilian economic and political relations; in Geneva he was the UK's chief resident representative to the World Trade Organisation; and in Vienna his primary focus was on the nuclear aspects of international peace and security, especially the Iranian nuclear issue. He also acquired regional (South America, and South West Asia) and country (France and Iran) expertise, and human resource management experience. Since leaving the Diplomatic Service he has been senior adviser to the Director of the International Institute for Applied Systems Analysis, and Special Representative for the Renewable Energy and Energy Efficiency Partnership. He is currently a non-executive director of a company that promotes clean energy solutions. He is an accredited Mediator through ADR Group, a sister company to ADRg Ambassadors. Recent Career History Professional Qualifications
Expertise

Courtesy: Wikipedia
A journey which began in Istanbul in 2012 ended in triumph in Vienna in July 2014, as the P5+1 countries and Iran announced a Joint Plan of Comprehensive action that would see Iran free of all economic sanctions while upholding the right to a civil nuclear programme. While this journey, fraught with challenges, technically is over, the ratification battle in the U.S. congress commences now 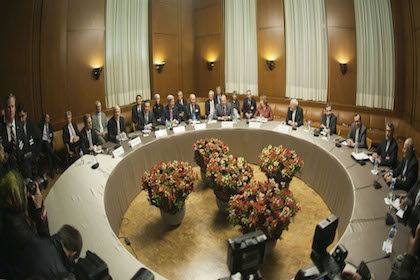 Courtesy: U.S. State department/Flickr
With the EU, Iran, and other entities taking decisive steps on April 2 to ensure a non-nuclear Iran, President Obama must now counter interests in the U.S. that want to stymie the final agreement. But having come this far, and considering the comprehensive benefits of an agreement, all sides are sure to deliver

Courtesy: RT.com
Talks are on in Vienna between Iran and the P5+1 to reach a settlement on Iran’s nuclear programme. The self-imposed deadline expires on July 20. However, with the U.S. insisting that Iran cut back on operational centrifuges any possibility of a comprehensive solution in the near future seems remote

Courtesy: European External Action Service
On November 24, the P5+1 and Iran reached a consensus on the interim agreement regarding Tehran’s long-disputed nuclear program. How comprehensive is this agreement, and what are its potential upshots for U.S., and West Asia – especially Israel and Saudi Arabia? More importantly, can India play a positive role?

Courtesy: Office of the President of Iran
In recent days, both the U.S. and Iran have intimated that they seek a broad improvement in relations, signalling a welcome thaw in bilateral ties. What does this mean for Tehran and Washington, and more importantly, how will this development play out in the West Asian region?

Courtesy: European External Action Service
Earlier in April, representatives of the U.S., EU, China and Russia held discussions in Kazakhstan to break the deadlock over Iran’s nuclear program, but with little result. What are the complexities of the Iranian nuclear dispute, and what are the chances of progress in the negotiations?

Courtesy: IAEA Imagebank/Flickr
Ahead of nuclear talks between Iran and the P5+1 in Moscow, the West seems confident that sanctions will induce Iran to settle on its uranium enrichment. But rather than arriving at a negotiated settlement by applying the principle of reciprocity, the West may look to anaesthetize oil markets.
Courtesy: IAEA Imagebank
The scope for any process on nuclear talks with Iran to founder on distrust, misunderstanding and political in-fighting in both Tehran and Washington remains formidable. Equally disturbing are the wider political realities. Can the upcoming talks in Istanbul launch a process that can, over time, lead to agreement?

Courtesy: PresidentIR
The leaders of Turkey and Brazil recently voted against sanctioning Iran, concluding that Iran's leaders do not intend to violate their most important Nuclear Non-Proliferation Treaty obligation. India, as a member of NAM, should also concede.