Kourosh Ziabari is an Iranian journalist and reporter. He is a 2016/17 FCO Chevening Scholar Iran, studying MA International Multimedia Journalism at the University of Kent's Centre for Journalism. Kourosh is an elected individual member of Chatham House: The Royal Institute of International Affairs. He is the recipient of a Senior Journalists Seminar 2015 fellowship from the East-West Center in Hawaii and the youngest Iranian journalist to have ever received the award. He covered the World Forum for Democracy 2016 in Strasbourg, France on a fellowship by the Council of Europe. Kourosh has been a reporter and correspondent with Fair Observer and contributes to Open Democracy, The Huffington Post, Your Middle East, International Policy Digest and Gateway House, among others.
Expertise

Courtesy: Shutterstock
Iran is reeling from the Coronavirus Disease (COVID-19), with no access to medicine or equipment due to severe sanctions, the continuing uncompromising position of world powers, and an ill-advised regime 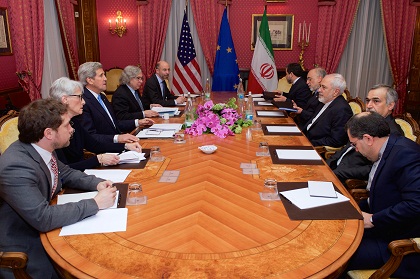 Courtesy: U.S. Department of State/ Flickr
Scrapping the JCPOA will badly bruise Iran’s economy, citizens and foreign relations; it will have an impact on the U.S.’ allies too

Courtesy:
Iran’s presidential elections have always been unmatched in the unpredictability of their outcome. Will the pro-reform vote be able to hold out against Ebrahim Raisi, the current president’s most serious competitor, with his appeal to the masses and traditional, conformist Iranians?

Courtesy: Tasnim News Agency
As Iran emerges from three decade of economic sanctions, it has embarked on a quest to reunite with its traditional trade partners like India. Both countries have much to give and take as they invigorate trade ties and explore new possibilities.

Courtesy: MEA India / Flickr
India finds itself in the long queue of global economic powerhouses that wish to avail the new opening between Iran and the international community. But India’s proximity and mutual interests of the two countries indicates that the time is ripe for a fundamentally new beginning in Tehran-Delhi relations.

Courtesy: Europe, Integration and Foreign Affairs/Wikipedia
A month after Iran’s milestone nuclear deal with the P5+1 countries, the fine print is being scrutinised by hardliners in Iran and the deal will eventually be prepared for implementation by President Rouhani’s government. India, poised to revitalise bilateral trade, will be among many countries that can now benefit from robust business ties with the Persian Gulf country.

Courtesy:
Kourosh Ziabari, Iranian journalist, sheds light on how the hardliners in Iran are reacting to the deal as well as why the Supreme Leader's backing will be key to the ratification of the JCPOA.

Courtesy: Marzieh Soleimani, Islamic Republic News Agency
Iran's nuclear deal deadline is looming large, and sparks are already flying. While there is opposition to the deal from Israel, within Iran there are powerful interest groups driven by ideology and business interests, who are doing as much as possible to prevent a deal from being reached

Courtesy: Zuma Press
The JCPA between Iran and the P5+1 countries is being welcomed positively in Iran. President Rouhani was elected in 2013 on a platform to to improve Iran's relations with the world and majority of Iranians wait anxiously for the improved socio-economic benefits that will follow