Akshay is the former Chief Executive Officer, Director of Research and a Fellow of Geoeconomic Studies. His research focuses on the architecture of international business, finance and trade, and its impact on geopolitics. Before joining Gateway House, he worked as a Principal Architect with Fidelity Investments in Boston in the advanced research, strategy formulation, and business architecture. He has an MBA from Boston University’s Questrom School of Business with concentration in Finance and Business Analysis and research focused on transnational business and global macroeconomics. He has a B.S. in Computer Science from the School of Computer Science at University of Massachusetts, Amherst. Akshay is an alumnus of Mayo College, Ajmer. He is the co-founder of an NGO called Aasra Gramin Vikas Sansthan and of a social enterprise called Khushi Farms, both based in Ajmer, Rajasthan, India. Hi-Res Photo
Expertise 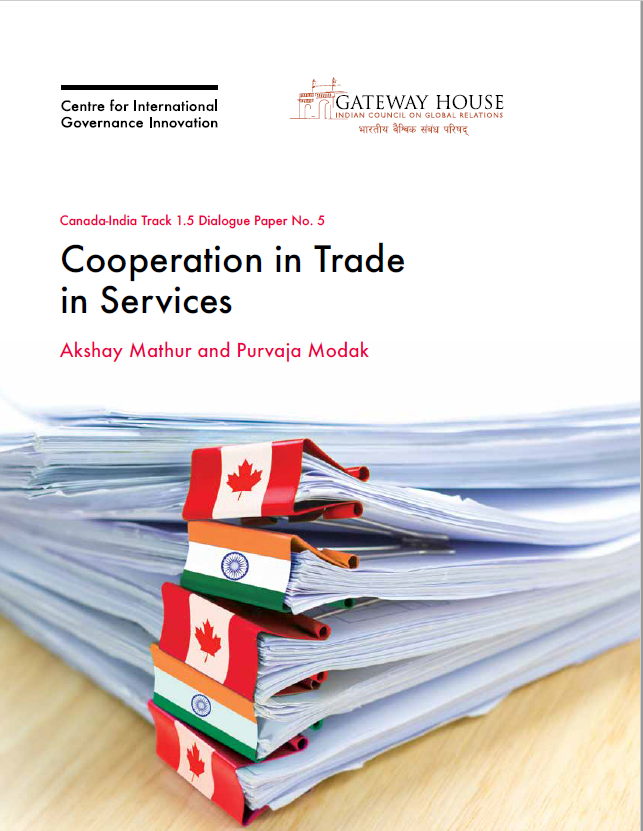 Courtesy: Gateway House & CIGI
The shift in the global trend from trade in goods to trade in services, especially digital services has focused attention on the necessity of a modern and robust regulatory framework for it. The bilateral steps by India and Canada outlined in this paper can feed into current efforts by multilateral institutions to develop a universal framework for capturing services trade data.

Courtesy: Shutterstock
The services sector is the most dynamic in the global economy, constituting nearly 25% of global trade, but its intangibility – unlike the materiality of trade in goods – makes it difficult to monitor. Service providers in this sector need a national regulatory governing framework

Courtesy: Flickr/MEA
It’s time to start moving on matters in which Canada is a natural ally for India - trade liberalization, energy investments, intellectual property and the rules around e-commerce in particular and big data governance in general.

Courtesy: MEA/Flickr
There have been mixed reactions to India’s not signing on to the Regional Comprehensive Economic Partnership. India is often criticised for abstaining from trade agreements and being a protectionist nation, but in fact, the reverse is true. The country’s trade to GDP ratio of 43% is higher than China’s 38% and the U.S.’ 27%. This shows how important trade is for India, particularly if it wants to reach the 2024 goal of being a $5- trillion economy.

Courtesy: Enterprenuer.com
The U.S. strategy to impose steep tariffs on Chinese goods shipped to the U.S. has been puzzling since the tariffs are likely to hurt a large number of American enterprises based in China

Courtesy: Select Fund
In a policy brief for Japan's G20 Presidency in 2019, Purvaja Modak, Akshay Mathur and K.N. Vaidyanathan discuss the need to encourage the development and adoption of processes and methods that can quantify the costs of using natural resources

Courtesy:
The Chinese leadership faces a range of economic problems and not very palatable solutions, says Prof Heribert Dieter, Visiting Fellow at Gateway House, Mumbai, and Senior Fellow, German Institute for International and Security Affairs, Berlin, in this wide-ranging conversation with Gateway House. He also analyses the European perspective on China, the U.S.-China trade war and the role of global forums, such as G20