Courtesy: Ram Kumar / Wikipedia
It is time for India to become autonomous on the energy front, even though it is, and will remain, a large importer of petroleum and coal. A combined strategy of diversification by using other forms of energy, and acquisition by buying oil fields, can help India reach this goal

Courtesy:
The oil-rich GCC countries are starting to show signs of financial stress maintaining high defense and social spending while the price of oil remains low 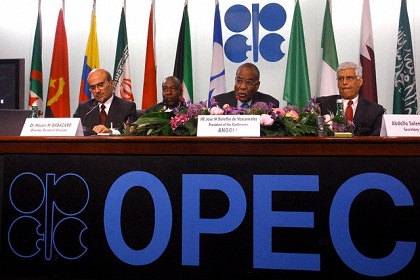 Courtesy: The Speaker-news
By keeping production high and oil prices low, OPEC is taking on oil and gas companies by undercutting their ability to investments in future oil & gas production

Courtesy:
Amit Bhandari, energy and environment fellow, speaks to Dev Lewis, Gateway House, on the impact of the Iran deal on global energy markets. He also outlines why this is a window of opportunity for Indian business

Courtesy: Wikipedia
A possible Iran nuclear deal means a longer window of lower oil prices. But the glut of oil supplies is already resulting in cutbacks to oil exploration and production spending, and will eventually lead to higher energy prices. Before that happens, India must use this opportunity to lock in prices

Courtesy: Petroleum.nic.in
The present pessimism about India’s dipping exports is a misreading of the numbers—the country’s exports have fallen because of the lower price of petroleum, and not due to any slowdown in industrial activity or reduced demand from foreign markets

Courtesy: Amit Dave (Reuters)
Conjecture about a Rosneft-Essar deal shows how the oil market dynamics have shifted in the past few years. Just as supply security is important to oil buyers, demand security is crucial for oil suppliers. Buying refining and marketing assets in big markets like India is the route to demand security for Russia, whose economy depends on petroleum exports.

Courtesy: Wikipedia
The price of petroleum has risen by almost 40% since February 2015 because of geopolitical tensions. This spike underlines the need for India to hedge its energy imports using a mix of financial markets and asset purchases

Courtesy: MEA Flickr
A common thread during Modi’s recent visits to China, Mongolia, and South Korea—as well as on his visits to other countries over the last year—is an attempt to move India away from coal and towards cleaner forms of energy such as solar power, natural gas, and nuclear energy. This signals a more responsible approach to development

Courtesy: Alamy
UK may be on its way to becoming a petro state, again, on back of an oil discovery that may be a whopping 100 billion barrels. The world is awash with cheap energy, and Indian companies need to seize the opportunity to acquire upstream energy assets.