Courtesy: The Hindu/Handout
Chinese president Xi Jinping’s visit to Myanmar on January 17 highlighted the economic aspect of the two countries’ bilateral relationship. China has been Myanmar’s top partner for years. But more than the 33 agreements signed, the visit threw light on the region’s changing geopolitics and Myanmar’s own compulsions in growing closer to China

Courtesy: Shutterstock
This year marks the completion of 70 years of diplomatic relations between India and Mexico – but the full potential of this bilateral relationship has not been explored. Mexico exports oil to India, and hosts facilities of the Indian auto, IT and pharma sectors. There are three profitable reasons to intensify the bilateral, fulfilling both the diplomatic and business agenda

Courtesy: FICCI
This is a transcript of a speech delivered by Ambassador Rajiv Bhatia, Chair, Federation of Indian Chambers of Commerce and Industry (FICCI) Core Group of Experts and Taskforce, at the launch of a study on the Blue Economy

Courtesy: Shutterstock
India will host four prestigious international conferences, such as the India-Africa Forum Summit and the subsidiary SCO Summit in the course of the next three years. These are historic opportunities for the country to show global leadership and fulfil a diplomatic agenda that involves handling strategic competition and advancing partnerships

Courtesy: MEA/Flickr
Relations between India and Sri Lanka are set to change. The expeditious manner in which the Indian external affairs minister met the newly elected Sri Lankan president, who reciprocated by making India the first foreign country he visited, raises hopes. An analysis of the factors that impede and facilitate such a shift

Courtesy: MEA/Flickr
The second edition of the India-Canada Track 1.5 Dialogue, held in Mumbai last month, drew many ideas from experts and government officials on diversifying and deepening the strategic partnership. A summary of some of the outcomes

Courtesy: Flickr/MEA
The 35th summit of the Association of South East Asian Nations, held in Bangkok early in November, showed that a shifting geostrategic landscape notwithstanding, “ASEAN centrality” in the region is a top priority with members. It also served as a backdrop for three summits that ASEAN held on November 4 with China, U.S. and India

Courtesy: The Hindu
With the West losing its ability to set the rules of global order, what matters to nations is the dominance of interests over values, argue foreign policy experts 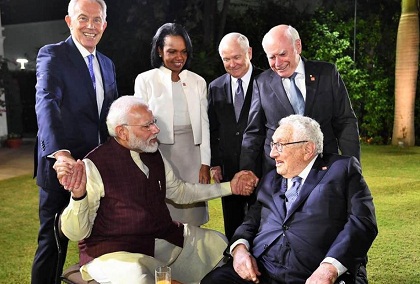 Courtesy: @narendramodi/twitter
Dr Condoleezza Rice and Dr Henry Kissinger, speakers at the annual meeting of the U.S-India Strategic Partnership Forum, in Delhi in October 2019, kept the audience riveted. The topics covered included China as competitor, the earlier disharmony in India-U.S. relations, and tips from a veteran on the art of negotiation

Courtesy: MEA/Flickr
Bangladesh prime minister Sheikh Hasina’s visit to India earlier this month, resulting in seven new agreements, showed the strength of the mutual relationship. But both governments need to address some rankling issues: the sharing of the Teesta waters, the Rohingya problem and repatriation of the illegal people from Assam