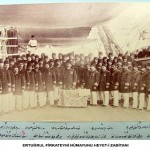 Amidst the dust, noise, and crowds of the by-lanes off Mohammed Ali Road in south-central Mumbai, stands a white and green mosque, the Ismail Habib Masjid. It is an oasis of tranquillity, with a tinkling water pool and shaded courtyard, and the headquarters of the Kutchi Memons, a community of traders originally from Kutch in Gujarat.

It is at this mosque 126 years ago that the 609 personnel aboard the Ertuğrul, including Rear Admiral Osman Pasha, the personal envoy of Ottoman Sultan Abdülhamit II, attended the Friday namaz. Ertuğrul—named after the father of Sultan Osman I, who founded the Ottoman Empire in 1299 AD—stopped over in Bombay for re-fuelling from October 20 to 28, 1889. It had come from Istanbul and was on its way to Yokohoma in Japan. [1]

Upon arrival in Bombay on October 20, the ship and its crew had received a rapturous welcome. A report, in a local newspaper, The Advocate, stated that  thousands, mostly the city’s Muslims, crowded the port to catch a glimpse of the imperial frigate, sent by the “Sublime Porte” (the Ottoman Sultan). [2]

To commemorate the 125th anniversary of Ertuğrul’s voyage from Istanbul to Yokohoma, the Turkish naval frigate TCG Gediz is retracing this historic journey by stopping at every port that the Ertuğrul stopped at. The Gediz (named after a river in western Turkey) was in Mumbai from April 20 to 23. It is now on its way to Colombo in Sri Lanka, and it will be at Tokyo (near Yokohoma) from June 5-9.

It was in this context that this author gave a talk on April 20 aboard the TCG Gediz titled “Commemorating 126 years of the Bombay visit of the Ottoman frigate Ertuğrul”. The event was jointly hosted by the Consulate of Turkey in Mumbai and Gateway House.

The lecture retraced the milestones of the Ottoman naval ship’s visit to Bombay. The Ertuğrul reached Yokohoma seven months after it was in Bombay, on June 7, 1890, making this year the 125th anniversary of the frigate’s visit to Japan. It was the first Ottoman naval warship to enter Japanese waters. [3]

When the TCG Gediz eventually reaches Yokohoma, a series of programmes will commemorate what both countries view as a foundational event of Turkish-Japanese friendship.

However, the commemorative events will have a sombre note—a memorial for the crew who lost their lives aboard the Ertuğrul. This ship sank on September 16, 1890, while battling a typhoon off the island of Oshima in south-west Japan, just as it had embarked on its journey back to Istanbul. Of the crew of 609 only 80 survived.

Their memory remains enshrined at Ertuğrul’s Tomb of the Martyrs and the Ertuğrul Memorial Monument in the town of Kushimoto, just south of Yokohoma.

The importance of Ertuğrul’s voyage

The story of the Ertuğrul, and the memory of its “diplomatic mission” to Japan play a significant role in reaffirming Turkish-Japanese friendship even today.

In 1985, a Turkish Airlines plane was flown into Tehran, during an escalating Iran-Iraq crisis, to rescue 215 Japanese citizens. When the mission was successfully completed, the Turkish government stated: “We have not forgotten the rescue of the sailors of the Ertuğrul.” [4]

Ertuğrul’s voyage falls in a little-known category of naval fleet activity known as benign or naval “diplomatic missions”. Navies across the world (including the Indian Navy) engage in building bridges of friendship with other navies and nations through friendly visits, joint naval exercises, and international fleet reviews.

To mark the Ertuğrul’s friendly touchdown, Rear Admiral Osman Pasha bestowed the ‘Order of the Imtiaz’, the highest Ottoman honour, on the Meiji Emperor of Japan.  Just two years earlier, in 1887, Prince Komatsu Akihito, the emperor’s brother, had established official contact with the Ottoman empire. On behalf of the Meiji Emperor, he had bestowed Japan’s highest honour—the ‘Order of the Chrysanthemum’—on Sultan Abdülhamit.

These gestures of friendship between two centuries-old empires at extreme ends of the Asian continent, in a world that was rapidly globalising and changing, and on the threshold of the First World War (1914-1919), were unique.

Bombay and the Ottoman empire

From the middle of the 19th century, while Japan, was gradually transforming into the first modern Asian industrialised economy, the vast Ottoman empire was weighed down with external pressures (particularly the Balkan Wars of 1877 and 1912-13), internal dissidence, and fiscal debts.

In spite of this, the Ottoman empire was a force to reckon with till the turn of the 20th century. This was amply exemplified in the welcome the Ertuğrul received in Bombay.

Trading activities between the west coast of the Indian subcontinent and West Asia are almost two millennia old. The islands of Bombay became a primary centre of this trade after the decline of the Mughal port city of Surat by the late 18th and early 19th centuries. Ottoman trading communities, like the Arabs and the Baghdadi Jews, made Bombay their home during this period.

The West Asian trade of the 19th and early 20th centuries was predominantly a trade in Arabian horses (prized by the British Indian army), the Basra pearl trade, food grains, coffee, sugar candy, cotton piece goods, dried fruits, and dates. The most well-known Bombay merchant with origins in the Ottoman empire, who dominated this trade, was David Sassoon (1792-1864).

The city was also the main port of embarkation for the annual Hajj pilgrimage to Mecca, Medina, and Karbala (for Shias)—all these places were located within the Ottoman empire. The Ottoman consulate in the city, established in 1849, was often busy issuing visas not just to Muslims from the subcontinent but also from the Central Asian regions of Bukhara and Turkestan-Kashgar.

Rapid strides in communications (telegraph and postal) and transportation (steam navigation and the opening of the Suez Canal) not only multiplied the trade between Bombay and the Ottoman empire, but also increased the number of pilgrims undertaking the then arduous Hajj.

The visit of the Ertuğrul to Bombay in 1889 and the warm welcome the crew received from local communities was a result of these long-standing ties.  The friendly visit this month of the TCG Gediz to Mumbai, whilst retracing the route of the Ertuğrul, once again foregrounds the importance of these historic trade and cultural linkages between Turkey and our city.