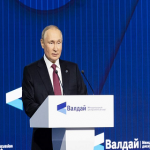 In his wide-ranging speech at the prestigious Valdai Discussion Club in Moscow on October 27, Russian President Vladimir Putin gave India a special place. “India has made great strides in its development, and, of course, it has a great future…and a growing role in international affairs,” he said. He then paid compliments to Prime Minister Narendra Modi, adding “Prime Minister Modi is the man, one of those people in the world, who is able to pursue an independent foreign policy in the interests of his people.”[1]

The encomium from a powerful head of state has turned heads in India, where Putin himself has many admirers. He has often expressed his appreciation of India’s not taking sides in the conflict with Ukraine. But the particular reference to India at Valdai may be interpreted as encouragement to New Delhi to use its good offices to nudge the warring sides to the negotiating table.

Mediation is a big power game, and this may be the right time for India, at the cusp of the G20 Presidency, to enter the year with a record of success – or at least a determined effort – at trying to resolve a confrontation that is now impacting the ordinary man, and one that could ruin India’s global moment. India has credibility with both sides: it is the only country that successfully evacuated 22,000 of its students from the Ukraine early in the war, using its diplomacy with both Moscow and Kiev. Since then, Turkey and Israel have both tried to mediate – with limited success.

What is clear, eight months into the fighting and the global hardships, is that Russia is hardly isolated. If Valdai can be used as a barometer, half the world was present to hear President Putin espouse his version of the emerging alternate world order. There were representatives from India to Sri Lanka to China, South Korea, Venezuela, Iraq and Kyrgyzstan, but also from the “other” U.S.-led half, such as the U.K. and Canada. Many in the emerging world are as Putin pointed out, unable to adhere to the standards set by the “Western elite” which insists on the universality of its culture and world view. They want that “these very values ​​be unconditionally accepted by all other participants in international communication.”

The devoutly Orthodox Christian Putin’s deliberate separation of “Western elites” from the “traditional West,” is reflected in the wave of opposition governments being elected in Europe, most recently Giorgia Meloni’s Fratelli d’Italia party in Italy, on issues close to family and society. Now there is the possibility of a Republican win over the ruling Democratic Party in the mid-term elections in the U.S. It may not immediately change the U.S. stance on Russia, but it will certainly deepen the societal and political churn in Atlantic societies.

Meanwhile, the Ukraine-Russia conflict is hastening the establishment of an alternate order, which Putin describes as “based on law and right, be free, original and fair,” one where the dollar is not the determinant, where multipolarity is starting to take shape, where integration is preferred to blind globalisation, where “traditional values… must simply be respected” and where “culture and historical experience” matters. This conceptualisation by Putin is not new; he has been presenting the move away from the mainstream since 2018. Long-standing sanctions against Russia has also forced the country to become self-sufficient and find an engagement with other nations on different terms.

In this, Russia has company from a world of Western-sanctioned countries, from China to Iran to Venezuela. The US Treasury Department proudly lists[2] the 38 sanctions imposed on 25 countries whose governments don’t abide by its rules. Those like India remember only too well the pain of sanctions past, while the South Americans recall the regime change era starting from the 1960s into the 21st century, the avoidable hyperinflation; all want to keep their options open.

The emerging world now has a global table at a height which is easier to reach, and which doesn’t demand too much internal societal turbulence. If India does attempt to mediate between these two worlds, it will have to work deftly with the U.S., the other key protagonist in this dreadful Western drama, and persuade it that only an end to the European conflict will preserve some part of the world order built in its image 75 years ago.

A version of the article earlier appeared in the Indian Express.