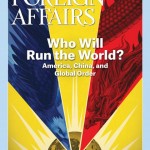 China will not, repeat, not repeat the old practice of a strong country seeking hegemony,” Wang Yi, China’s foreign minister, said last September. It was a message that Chinese officials have been pushing ever since their country’s spectacular rise began. For decades, they have been at pains to downplay China’s power and reassure other countries—especially the United States—of its benign intentions. Jiang Zemin, China’s leader in the 1990s, called for mutual trust, mutual benefit, equality, and cooperation in the country’s foreign relations. Under Hu Jintao, who took the reins of power in 2002, “peaceful development” became the phrase of the moment. The current president, Xi Jinping, insisted in September 2017 that China “lacks the gene” that drives great powers to seek hegemony.

It is easy to dismiss such protestations as simple deceit. In fact, however, Chinese leaders are telling the truth: Beijing truly does not want to replace Washington at the top of the international system. China has no interest in establishing a web of global alliances, sustaining a far-flung global military presence, sending troops thousands of miles from its borders, leading international institutions that would constrain its own behavior, or spreading its system of government abroad.

ORIANA SKYLAR MASTRO is Assistant Professor of Security Studies at Georgetown University and Jeane Kirkpatrick Visiting Scholar at the American Enterprise Institute. She is the author of the forthcoming book The Costs of Conversation: Obstacles to Peace Talks in Wartime.

This article appeared in the Foreign Affairs 2019 January/February edition. It is republished here with permission.

This article was originally published by Foreign Affairs. You can read the rest of the article here.

Copyright © 2019 by the Council on Foreign Relations, Inc.