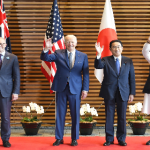 Given the multiplicity of plurilateral groupings, it is natural that only those among them that are led by the heads of state or government command sustained international attention. But often leaders’ personal involvement raises public expectations to an unrealistic level. This is the situation of the Quad, comprising the United States (US), India, Japan, and Australia – on the eve of its leaders’ second physical summit, being held in Tokyo on May 24.

The Quad powers held two digital summits in March 2021 and March 2022. The first physical summit, held in Washington in September 2021, will now be followed by the Tokyo summit. Meanwhile, Quad foreign ministers have already held four in-person meetings since September 2019 and relevant officials meet frequently to advance and implement the agenda set by the leaders.

In Tokyo, a serious stocktaking is expected to be undertaken to measure the progress secured concerning an agreed and wide-ranging list of proposals and initiatives for cooperation. These include “the original three” — on vaccine partnership, climate, and critical and emerging technologies — and the additional ideas approved by the leaders last September.

The latter covers measures to improve health security; infrastructure-related cooperation; forging of climate-linked cooperation through a green shipping network and a clean hydrogen partnership; increased exchanges in education and people-to-people ties; and enhanced contacts for cyber security, space, and 5G deployment and diversification. A Quad statement of principles on the design development, governance, and use of technology that paves the way for responsible and high-standards innovation has also been in the works and is nearing finalisation. A statement issued by the ministry of external affairs on May 17 indicated that the leaders would “review the progress of Quad initiatives and Working Groups, identify new areas of cooperation and provide strategic guidance and vision for future collaboration.”

By the very nature of these far-reaching initiatives, they need ample time to be developed into practical actions. But the expectation at the political level is that the convening of the second summit within eight months will help expedite the process. Quad could thus move towards stronger internal consolidation when it comes to crafting a common strategy for the economy, higher education, industry, and technology.

If Quad’s raison d’être is to strengthen and project unity among its members facing a common challenge from the hegemonic and confrontationist China, the war in Ukraine and the ill-advised US (and European) moves to put diplomatic pressure on India to condemn the Russian invasion were a clear negative. Pressure began to be built up at the last meeting of the foreign ministers in Melbourne even before the invasion began; it was stepped up during external affairs minister S Jaishankar’s visit to Europe; it escalated in the run-up to the 2+2 US-India ministerial dialogue in Washington.

New Delhi’s dogged efforts eventually produced a good result as the US and its allies understood India’s strategic autonomy to conduct a policy that serves its national interest. India too moved the needle a bit by conveying its displeasure to Russia in multiple ways (such as by agreeing to strengthen the wording of later United States resolutions), and this helped matters with the US.

Against this backdrop, experts suggest that Tokyo should now take Quad beyond the shadows of the Ukraine crisis. Once the US, Japan, and Australia accept that the real issue in the Indo-Pacific is China, not Russia, the summit participants can focus on the challenges facing them.

One of these is to continue winning the perception war in relation to China. Beijing’s attempts to dismiss Quad as an “Asian NATO” have had few takers, especially after the formation of AUKUS which is a pure security alliance. Quad projecting itself as “a public good” will succeed if other nations of the region agree to work with it, in formal and informal ways. This appears to be happening now.

The decision by the recent US-ASEAN (Association of Southeast Asian Nations) summit to announce a “comprehensive strategic partnership” between the two sides is a welcome development. However, they need to do more. A close look at the outcome documents suggests that the two parties should be more candid and courageous in addressing the problems created by China in the South China Sea. They (and others) should be much more concerned over the lack of the finalisation of the Code of Conduct (COC) which has been under negotiation between China and ASEAN for over a decade. While ASEAN is anxious to curb China’s expansionist behaviour, the latter resist any such attempt knowing fully that the regional grouping can do little to secure China’s agreement on an effective and substantive COC. Hence the US needs to clarify and strengthen its position as a signal not only to ASEAN but also to Quad.

Quad also needs to elicit the support and engagement of the interested states in eastern and southern Africa with the pursuit of its goals and strategy, while assuring them that they would not be involved in the strategic contestation between the US and China. After all, those regions are part of the Indo-Pacific. Given its significant role in the Indian Ocean Region, India can extend valuable assistance to Quad by stepping up naval cooperation with other friendly Navies.

It is necessary to acknowledge two gaps in the Quad strategy.

First, by excluding all matters pertaining to maritime security, it has enhanced its attractiveness to other nations of the region. But it must continue to focus on them through other channels such as the annual Malabar naval exercises and bilateral and trilateral channels for defence cooperation. Second, it needs to expand efforts to present an economic cooperation framework to counter China’s economic influence, which must be short on rhetoric and long on action and delivery. Will the Tokyo summit fulfil this expectation?

Finally, the next two annual summits are likely to be hosted by India and Australia. India’s turn will come in 2023 or 2024. If it is 2023, it may clash with India’s existing commitment to host the G20 summit that year. A Quad summit in India, whenever it takes place, will be a superb opportunity for our nation to assert and project its preeminent role in Asian and global affairs.

This article was first published in The Hindustan Times